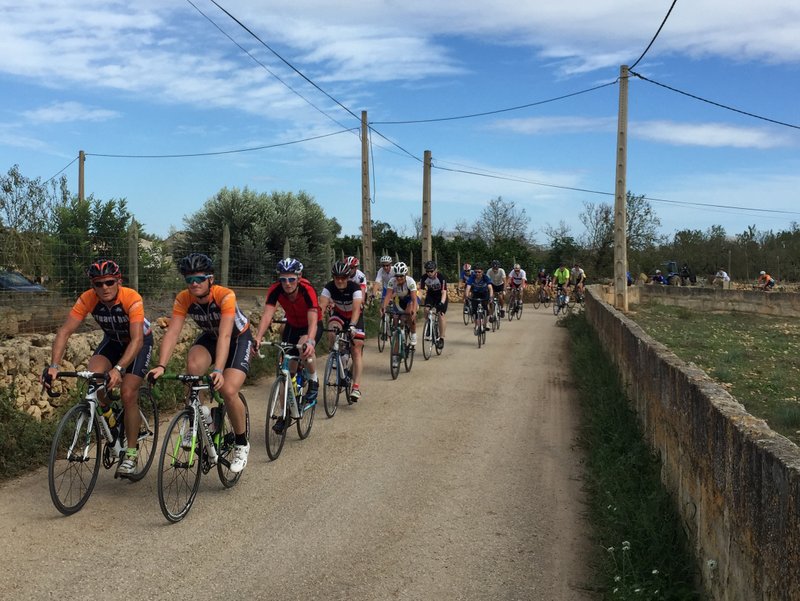 Stuart Hall Cycling’s 2015 calendar finished on a high with our most successful October camp ever – thank you to all those who joined us, and to all the staff for helping make it such a great trip.

This year we were based at two new hotels – the Oro Playa aparthotel in Puerto Pollensa for the beginning of October, and the Condesa de la Bahia in Alcudia later in the month. Both proved very popular, and we will be returning to the newly-refurbished Oro Playa apartments in October 2016.

Nearly 300 people joined us in the course of the month, a large increase on prior years, and at our busiest, we had 181 people, and 7 rides going out. We visited many of Mallorca’s best climbs – including the Orient, Puig Major, Randa and Sa Calobra, as well as beautiful rides through the fantastic Mallorca lanes to Petra, Sineu, Algaida and Llucmajor, to name just a few.

A selection of photos from the month are on our 2015 photo gallery, showing some of our cafe stops and rides. There are also some individual photos from Sa Calobra – this is the video of the group rolling out to the climb up Lluc on the way to Sa Calobra:

We return to Mallorca on 5 January 2016 and we’re already taking bookings for Jan to May, and next October. Book early to avoid disappointment; we are already full for the weekend 8-10 April 2016.

x StuartHallCycling @SHallCycling Beautiful warm and sunny day in Mallorca - even the locals are now in shorts! We put on our climbing legs and visit… https://t.co/ih1xEPRWSw 6 days ago
Open in Twitter

x StuartHallCycling @SHallCycling A snapshot of the last two days on a cycling holiday with us in Mallorca through Aaron’s eyes. #livingthedream… https://t.co/ptSxeutaxr 7 days ago
Open in Twitter

x StuartHallCycling @SHallCycling A snapshot of the last two days on a cycling holiday with us in Mallorca through Aaron’s eyes. #livingthedream… https://t.co/D4cBHRE679 7 days ago
© Stuart Hall Cycling Limited 2021. Terms & Conditions | Privacy Policy | website by Slib
We use cookies to ensure that we give you the best experience on our website. If you continue to use this site we will assume that you are happy with it.OkPrivacy policy