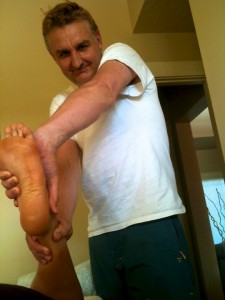 A masseur who has soothed the aches and pains of many of the world’s top cyclists will be available to Stuart Hall Cycling customers in 2015.

Andy Hillman, whose previous clients have included Chris Frome, Jeremy Hunt, Baydon Cook, Rigberto Uran and Yaroslav Popovich, will be giving half hour massage sessions throughout the March, April and May trips.

A keen cyclist himself, Andy has spent 10 years working with pro teams including Radioshack and Unibet

“I absolutely love being around cyclists and I’ve had lots of positive feedback about my massage technique,” he says.

Andy, who is almost two metres tall, has even earned himself the unusual nickname of The Hillmanator.

“My massages are totally different to others,” he says. “They are quite deep and firm. I’ve developed my own technique. I’ve been told that I’m not The Terminator but The Hillmanator.”

His 30 minute massages will cost 20 euros.

x StuartHallCycling @SHallCycling January lunch in the sun, soaking up the rays. Life could be worse! #mallorcacycling ☀️🕶🚴‍♀️🚴‍♀️🚴‍♀️ @ Felanitx, Is… https://t.co/Otl4GRU8jR 2 days ago
Open in Twitter

x StuartHallCycling @SHallCycling The sun’s shining, almond blossoms are starting to bloom - what better day to pay a visit to the stunning Andratx c… https://t.co/8HYlV273dp 6 days ago
Open in Twitter